Perhaps the best part of publishing a new novel for Pat Conroy is having the chance to meet so many of his readers while on his book tour. A close second is spending so much time in bookstores surrounded by the wonderful works of writers and the booksellers who spend their days promoting them. In his next letter to readers Pat calls out by name a few old friends who came to see him along the way and also shares thoughts about some of the books by others he has recently read and enjoyed.

I returned to Fripp Island last Saturday after a driving tour around the South.  It was tiring, but exhilarating and I found that I love meeting the people who read my books.  They tell me stories.  Some of them resurrect a past I had forgotten long ago.  Citadel alumni turn out in large numbers.  They tap Citadel rings with me before they leave the signing table.  A grandmother who read The Water is Widethe first year she taught English had me sign a book for her granddaughter who had just begun her first year as an English teacher.  I listened to stories of the Iraq and Afghan wars. 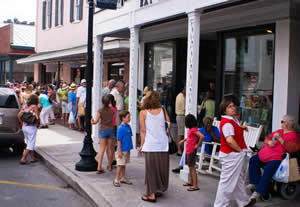 Because of my cookbook, people brought me pound cakes, pickled shrimp, a dozen oysters, grits, boiled peanuts, heirloom tomatoes, crawdads and other good things to eat. In Birmingham, I spoke to a crowd after the writer, Rick Bragg, and my comely wife, Cassandra King, warmed the audience up. It annoyed me that both Rick and Cassandra were funnier that I was and I could not help but notice the letdown and sense of disappointment that rushed through the crowd when I got up to speak. We then had dinner at Frank Stitt’s magnificent restaurant, the Highland Grill. Because I once wrote an introduction to his superb cookbook, Frank and his staff feed me like a king whenever I am lucky enough to be in Birmingham.

In Charleston, I spoke briefly to the assembled groups and spotted Mike Mahoney, my longest running friend in the world, grinning at me. I’ve known Mike since sixth grade when my family moved to Culpepper Street in Arlington, Virginia. He was a great kid and proved to be a lifelong friend. His mother and two sisters were knockouts and Mike and I were altar boys when his mom, Kitty, married the irrepressible Don Mancini. Kitty has always served as a north star in my conflicted life. The Mahoney family took me in when I was a sixth grader and have never let me go. Mike and his wife Rita recently retired and moved near coastal North Carolina. I promised to visit them soon.

My Citadel roommate, Mike De Vito, was there, and so was Dave Bornhorst, the heart and soul of my Citadel basketball team. I think I knew more than two hundred people in line and I had once asked one of them to marry me. I had met Marnie Huyer when we applied for a job working with migrant workers and we sat beside each other as we awaited our turn to be interviewed. She was as lovely a young woman as I had ever seen, and we dated that whole summer. Her family lived on Sullivan’s Island and I was smitten with all of them. Marnie and I went out ten or twelve times that summer and I was happy just to be along for the ride. I wanted to marry the whole family. I began teaching at Beaufort High School in 1967. I wrote a letter to Marnie in college, and I have a distinct impression that I asked Marnie to think about marrying me. As I look back on the callow boy I was, the letter must have struck Marnie as hilarious. She wrote me a sweet letter back telling me how much the summer had meant to her and her family. Though flattered by my offer, she suggested that I think about holding her hand or kissing her if I were serious about approaching the altar with her. At the signing, Marnie gave me a long letter that she had written me. The letter was lovely, and I shall treasure it the rest of my life. 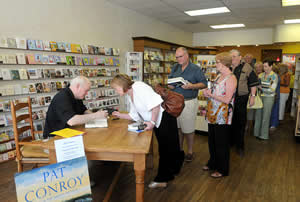 Being inside a bookstore stimulates my desire to read and being on tour gives me lots of time to do so. Steve Rubin sent me a copy of John Grisham’s book of short stories, Ford Country, and I read it with pleasure and growing excitement. The short story seems like a majestic but difficult form to me and I had not known that John would prove so gifted in the art of the short story. I’ve known John for awhile now and have read his books since he first catapulted onto the national stage with The Firm. He calls me periodically to chastise me for my occupational laziness and my shameless inability to produce a novel in this century. John works as hard as any novelist I’ve ever met, and I’ve been hooked on his books since he first started publishing with Doubleday. After admiring his short stories, I’m going to try to get him to write a book of poetry. I think he could pull it off.

Two other big boppers, John Irving and Richard Russo, have published books this season and they both burn brightly in the pantheon of writers I revere. Both these guys can’t write a grocery list without it sounding like literature. I collect the work of both men and their books have proven to me that New England is every bit as quirky, eccentric, and character rich as the South. Margaret Atwood’s new book arrived at the house yesterday.

Last night, I finished a book Why This World: A Biography of Clarice Lispector by Benjamin Moser. Always, I hunt for great writers I’ve never heard of, and Clarice Lispector is considered to be one of the greatest female novelists in the history of Brazilian literature. In 1978 I got myself exposed to Latin American literature and I think it changed my life. I went through a long fruitful period when I read almost nothing else as I devoured the work of Marquez, Vargas Llosa, Borges, Carpentier and a dozen others. If there is a better novel than A Hundred Years of Solitude, I don’t know what it is. The oddly named Clarice Lispector had avoided my detection, yet I found the story of her life both improbable and riveting. I have ordered her novels and I await their arrival.

At my writing desk, I’m reading Robert Pinsky’s new anthology of poems Essential Poems. I’ve always liked Pinsky’s poetry and it’s nice to see such refined taste in his choice of other poets.

There is another book out there that I need to talk about, my daughter, Melissa Conroy, has written and illustrated her first children’s book. It is called Poppy’s Pants. The great secret of the book is I am Poppy. My first grandchild, Elise Conroy, started calling me Poppy as soon as she began to talk. There was never any indication given about where this nickname came from, but the rest of the grandchildren have picked it up. Several years ago, Melissa took a drawing of me by her daughter, Lila, and made a doll, a Poppy doll, for her child. The doll looks like a whacked-out sumo wrestler on steroids, but Lila carried it around with her. I told my daughter that if I thought I really looked like that doll, I’d put my head into an oven. But my other grandchildren clamored for one of their own and a cottage industry was begun. Blue Apple books saw the dolls at an art show in New York and asked Melissa if she’d like to do a children’s book. Melissa took a story from her own childhood and turned it into her first book.

Though I never noticed that I only wore khaki pants, my children certainly did. When Woo (my nickname for Melissa) was about five, she told me I had a hole in my khakis. She offered to sew them up for me and I accepted. When she asked me about what color she should use, I answered that I was color blind and that I saw the world like a cocker spaniel saw it, not like a human being. Woo sewed it up using aquamarine thread because she wanted to add color to my monochromatic life. The result delighted me and my daughters claim I wore the same khakis for at least three more years. I wrote an afterword to Poppy’s Pants and am going to sign books with Melissa in the near future. She suggested I wear khaki pants. I suggested she sew them up with aquamarine thread.

Next in line is a non-fiction book called MY READING LIFE about some of the books and people that have inspired me. It has been a joy to write.

I’ve already begun work on a new non-fiction book about my family with a great emphasis on my father’s post-Santini life. My father managed to change his entire life after I wrote a novel about his brutal regime as a family man. It took resoluteness and courage for my father to change, and I need to acknowledge that. My brothers and sisters have all gotten nosebleeds and migraines since they heard news of this project. I hope to write it in a year while taking notes on my Atlanta novel.

A woman in Charlotte approached me and said that she’s tired of the dysfunction in my novels. I told her I was sorry, but that is how the world has presented itself to me throughout my life. She told me her family was normal and they were proud of being a happy family with no clouds on the horizon. I congratulated her and told her I wished I had been raised in such a family.

Thank you for reading South of Broad. It is, as all of my novels have been, a love letter to all of you who read my books.

Great love out there,
Pat Conroy